Raiders fall to 0-2 after loss to Broncos

Jon Gruden and the Oakland Raiders looked to bounce back from a 33-to-13 loss to the Los Angeles Rams as they traveled to Denver to take on the Broncos on a short week.

Just like last week, Gruden’s offense got off to a quick start going 67 yards on nine plays before their drive stalled out in the red zone and they had to settle for a 26-yard field goal to take the early 3-to-0 lead against the Broncos.

Meanwhile, quarterback Derek Carr was also nearly perfect, completing 18 of his 19 pass attempts for 158 yards. The Raiders lone touchdown in the first half came on a one-yard touchdown rush by running back Marshawn Lynch, giving the Silver & Black a 12-t0-0 lead at halftime.

The Broncos got onto the board in the second half as quarterback Case Keenum orchestrated an 11-play drive to go 75 yards that culminated in a one-yard touchdown run by rookie Royce Freeman to make the score 12-to-7.

But Carr’s domination would continue. The veteran quarterback would complete all four of his pass attempts on the next drive, including a 20-yard bullet to Seth Roberts for a touchdown in between two Denver defenders to extend the Raiders lead to 19-t0-7.

Guenther’s defense dodged some bullets on the next drive when Broncos wide receiver Courtland Sutton beat cornerback Gareon Conley for a 41-yard pass but was ruled out of bounds after Gruden challenged the call of a completion. The Broncos were able to extend the drive on the next play, but another pass to Sutton into the end zone was ruled out of bounds after the Broncos challenged it. Denver would settle for a field goal, making the score 19-to-10.

Gruden stayed aggressive on the ensuing drive facing 4th and inches, but fullback Keith Smith dropped the pass on a perfect play call that would have at the first down.

The Broncos took advantage on the next drive, holding the ball for over seven minutes while going 67 yards on 14 plays. The Raiders defense stuffed Freeman when he attempted to dive over the goal live but the Broncos went for it on fourth down and Keenum dove into the end zone on a quarterback sneak to make the score 19-to-17 with under six minutes remaining in the game.

The Raiders had a chance to run the clock out but failed to get a key first down at the middle of the field and resulted in a punt back to the Broncos with two minutes left in the game.

Guenther’s defense failed to apply pressure on Keenum on the final drive, allowing the Broncos to march down the field 62 yards in just 10 plays. The drive resulted in a 36-yards game-winning field goal by Brandon McManus to send the Raiders home with their second loss in as many weeks.

The Raiders return home now 0-2 on the year, only to turn back around and fly to Miami to take on the Dolphins on Sunday. 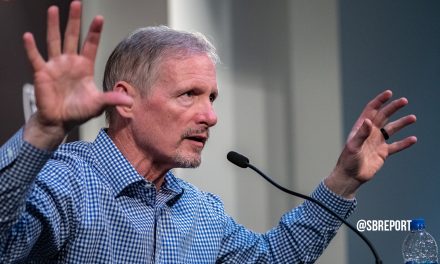 VIDEO: Mike Mayock Talks About His Reasoning For Moving Down In The 2nd Round 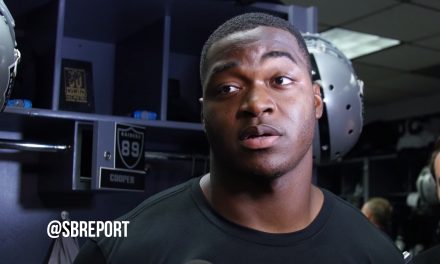 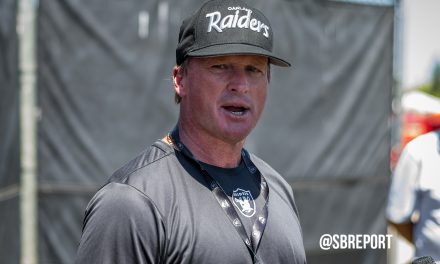 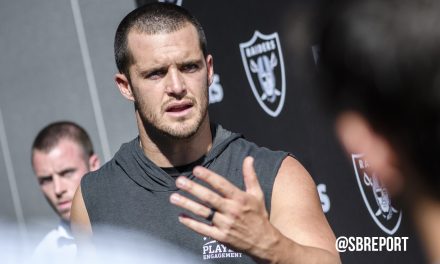 VIDEO: Derek Carr: “We all have to show up and give our best…”